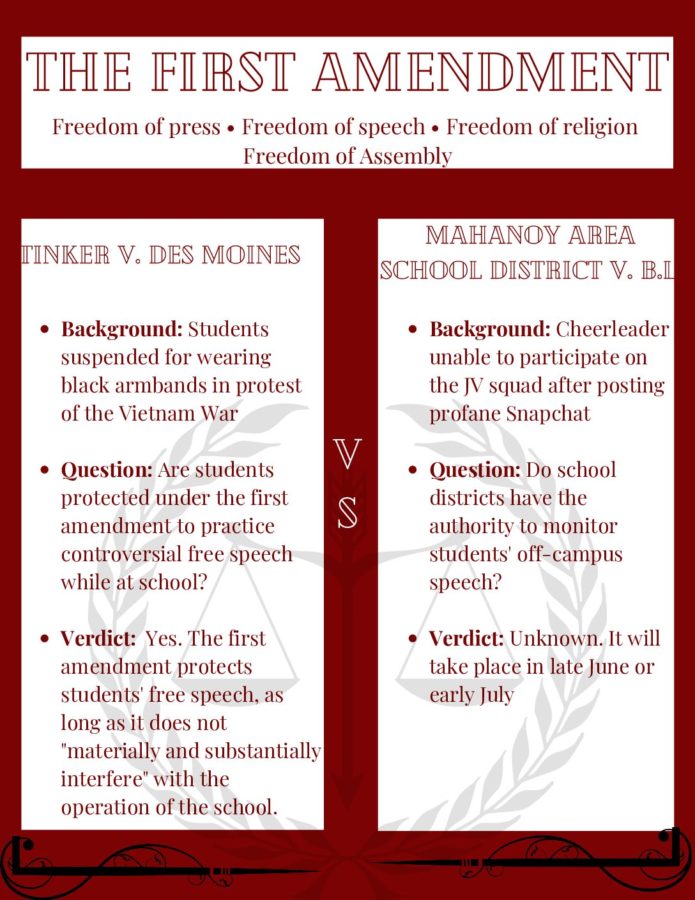 A cheerleader has made her way to the Supreme Court after she was banned from her school’s cheer squad, due to posting a profane Snapchat. This is now a landmark case that will help establish the extent of public school students’ free speech.
In 2017, a cheerleader named Brandi Levy was cut from her school’s varsity cheerleading squad. In anger and frustration, she posted a picture from a convenience store onto Snapchat of her and a friend holding their middle fingers up to the camera. The caption read “f*** school f*** softball f*** cheer f*** everything.” This snapchat made its way to the school officials, who then banned Levy from participating on the JV cheer squad.
Levy believed that the Mahanoy Area High School had violated her First Amendment right of free speech. However, the school district argued that the precedent set in the landmark supreme court case Tinker v. Des Moines allows them to discipline students’ speech when it disrupts the school’s operation.
For greater context, Tinker v. Des Moines went to the Supreme Court after students were suspended from the Des Moines Independent Community School District for wearing black armbands to school in protest of the Vietnam War. The Supreme Court ruled in the students’ favor, stating that the First Amendment protects students’ free speech if it does not materially and substantially interfere with the operation of the school. This ruling has allowed public schools to regulate student speech when necessary. Some examples of schools using this power in the past include banning shirts that read, “Old glory flew over legalized slavery for 90 years.” Tinker v Des Moines was also used in the 2007 case Morse v. Frederick. This case involved a student who brought a large banner outside his high school that said, “Bong Hits 4 Jesus,” which is a pro-drug message. The Supreme Court sided with the school district, ruling that they had the authority to regulate students’ speech advocating for illegal drug use.
With this in mind, Levy sued the Mahanoy Area School District. In 2020, the Philadelphia-based third U.S. Circuit Court of Appeals ruled in Levy’s favor. They stated that Levy’s Snapchat did not “materially and substantially interfere” with the operation of the school. Therefore, Tinker v. Des Moines could not be used to validate the school’s actions. Furthermore, Levy was off the school’s campus when she sent the Snapchat. The court stated that Tinker V. Des Moines does not apply to off campus speech.
However, the Mahanoy Area School District was not satisfied with this decision. They appealed to the U.S. Supreme Court, who will now rule in late June or early July.
This case has received much publicity as it will set the boundaries to the extent of free speech guaranteed to public school students. It will also clarify the now rather blurry boundaries between on-campus and off-campus, due to social media and online school. This is important, because generally schools have a much greater power over limiting free speech while students are on-campus.
As the Supreme Court Ruling approaches, many have voiced their opinions. Some say that it is important for young people to know they can speak their mind without receiving possible punishment. However, others believe that a ruling in the Mahanoy School District’s favor would allow schools to monitor off-campus bullying, racism, cheating and invasions of privacy. Whether the Supreme Court rules in the school district’s favor or not, this case will be remembered for future reference when dealing with social media and free speech in school.